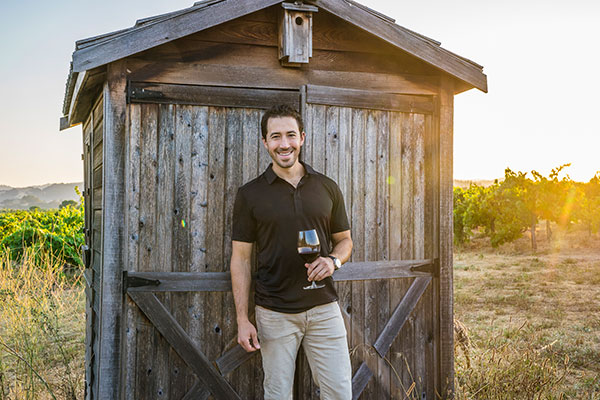 Early adventures to legendary vineyards and wineries around the world with his father, photographer Andy Katz, gave Colorado-native Jesse a profound respect for the creative art of winemaking.

Jesse creates distinct, nuanced wines for his brands Aperture Cellars and Devil Proof Vineyards. Aperture, a collaborative project with his father, focuses on Bordeaux varietals and demonstrates an expression of art both inside the bottle and out. Devil Proof Vineyards, consisting of two dramatic dry-farmed 100% Malbec single vineyards, received the highest rating of the varietal from California from Robert Parker, Jr., Wine Enthusiast, Wine Spectator, and was named “Cult Winery of the Year” upon its inaugural release.

Jesse’s diverse experience spanning 15 harvests at wineries, along with his desire to travel, fed his aspiration to learn from the best in the industry, including Pétrus in Bordeaux, as well as time on the winemaking teams at Screaming Eagle Winery and Robert Foley Winery in Napa Valley, and Viña Cobos and Bodega Noemia in Argentina.

In 2010, Jesse was the youngest-hired head winemaker in the US at Lancaster Estate where, during his five-year tenure, he orchestrated the building of the new Roth winery, production facility, and tasting room on Chalk Hill Road, grew the Roth line over 800%, and received 90+ scores on every wine scored by Robert Parker, Jr., and garnered Lancaster Estate’s inclusion on the list of Wine Spectator’s Top 100 Wines.

Wine Enthusiast named Jesse one of its 40 Under 40 Tastemakers and he was also the first winemaker on the Forbes 30 Under 30 list. Aperture Cellars was recently selected as a “Rising Star” by Wine Spectator and Devil Proof remains the highest-rated California Malbec by all the top wine critics, including Robert Parker, Wine Enthusiast, and Wine Spectator.

Jesse enjoys putting his craft to work raising funds for good causes, non-profits, and charity events. 1 00% of each vintage’s large format bottles of Devil Proof and Aperture are donated to charitable auctions along with numerous cases of wine each year. Jesse hosts special events including private blending sessions, vineyard dinners, and estate events supporting philanthropic endeavors throughout the world. Earnestly committed to the local community of farmers, chefs, artists, and entrepreneurs that make Sonoma County a globally recognized food and wine destination, Jesse is enthusiastic about collaborating and innovating with farmers, vintners, and culinary leaders.

“Like my father’s ability to tell amazing stories through his photography, my greatest joy is bringing together and interweaving the intricacies of space, place, and time – in essence, the terroir – that make a stellar bottle of wine.” – Jesse Katz